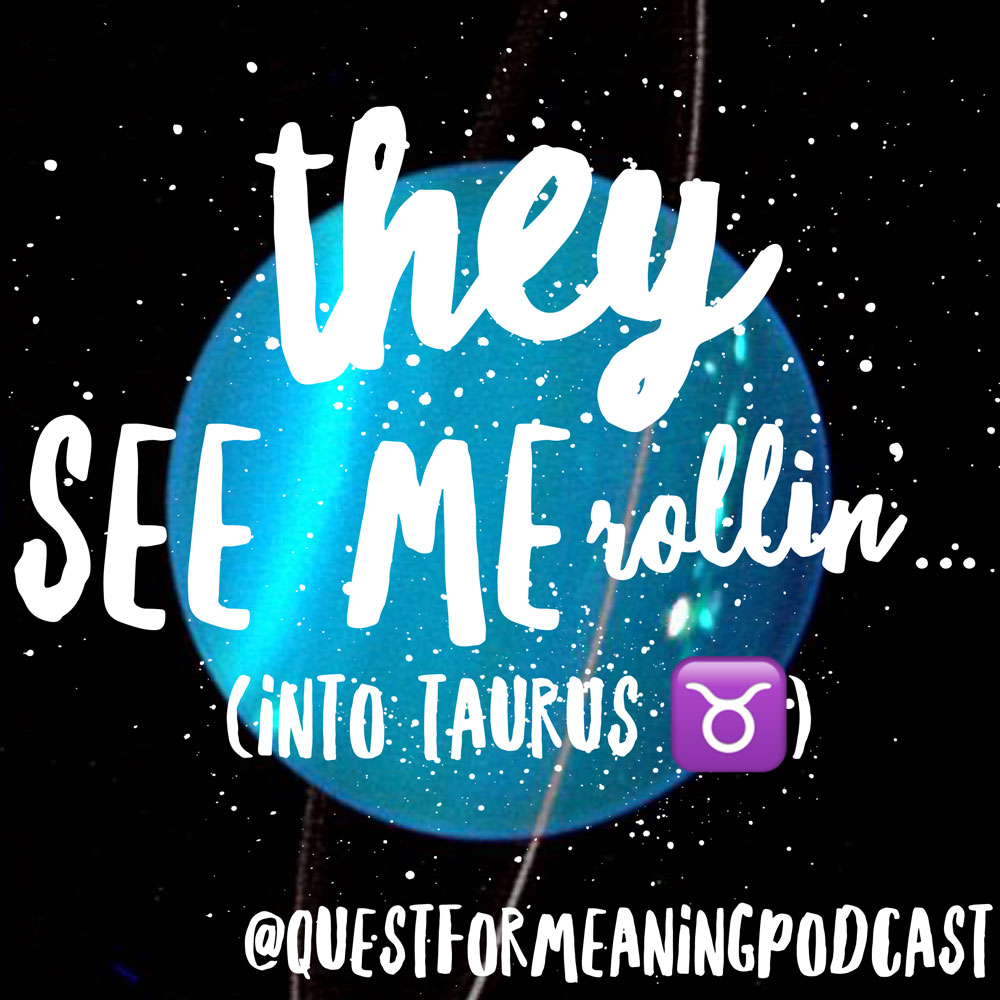 The beautiful blue planet enters the zodiac sign, Taurus, today, where it will stay for the next seven years.  It is saying farewell to Aries, and for those of us who have reached adulthood, we will likely never experience Uranus in Aries again.  Uranus has an 84 year orbit around the sun, so each passage through a new zodiac sign is usually once-in-a-lifetime for most.

Uranus is the planet to bring unexpected changes to the part of your chart it touches.  Because of it’s unusual movement in the sky – It actually rolls forward like a ball across the floor instead of spinning on its axis like every other planet – it has earned the reputation for being different, rebellious, chaotic and full of surprises.  While in Aries, we saw the rise of the Arab Spring, the uprising of excessive bigotry and hate (also attributed to Uranus squaring Pluto in Capricorn) and plenty of turmoil, divisiveness and chaos.  Like an Aries warrior, many of us have only been seeing issues from our side of the theoretical battlefield.  Uranus in Taurus already gave a sneak preview of how it may affect more Taurus-specific matters.  On the first day Uranus ingressed into Taurus in May 2018, supposedly dormant Hawaiian volcanoes exploded, destroying numerous homes.  It has since retrograded back in to Aries, but beginning now, it is here to stay.

Taurus is an earth sign, ruling our assets such as real estate and finances.  The volcano, quite literally, exhibits a force of earth.  Astrologers are guessing we’ll see crazy climates over the next seven years.  Perhaps, we’ll see crypto-currency or other unique banking or finance ventures become more mainstream.  Taurus also rules the physical body.  With no surprise on the timing, news broke that the “second ever” case of HIV was cured.  Hopefully, we’ll see more breakthroughs or unusual twists coming from the science and medical communities.  I haven’t seen anyone else purport this, but I am wondering if we will begin to see illicit drugs incorporated into medical treatments, such as LSD becoming a widespread treatment for depression, or even the widespread legalization of currently illegal drugs such as marijuana.

There are so many possibilities, but it is best we strap into our seats and buckle in for more surprises!

Furthermore, Uranus transiting Taurus will all affect us all differently.  Check out astro.com and search “free natal chart” if you do not already know where Taurus is in your personal birth chart, but for me, this will be Uranus’s biggest show since the 1990s.  My midheaven is at zero degrees Taurus, my  natal chiron and moon also fall within this sign.  I’m ready to “expect the unexpected”, because what else can you do?

When Uranus retrograded over my midheaven, I received a job offer so hopefully things remain fairly consistent on that front.  I have gotten some unexpected surprises because Uranus is at a critical point where it is also squaring my Venus at 0 degrees Aquarius, and opposing my Jupiter at 2 degrees Scorpio, just off my IC.  That’s a story for another day, though! Because I did NOT expect what has already begun unfolding from the bottom of my chart relating to my ancestry, past and childhood.

Have you witnessed or received any Uranus in Taurus surprises yet? What part of your chart is taking this hit?  Do you have any planets in Taurus?  It’s amazing how a beautiful planet can bring so much change, so let’s all get ready, because it will be once in our lifetimes.

Since just writing this article, news broke that ketamine is now being used as nasal spray and synthetic marijuana has been approved by the DEA for medical use.